You are being given a chance to contribute to the most exciting and significant Crowdfunding Campaign  in Human history. Most people are aware that so called UFOs have been around for over seventy years. The fact is that another class of UFOS have been around for thousand and thousand of years, hiding bare faced in the noon day sun completely unknown and unsuspected. The Ships are called, 'The Radionnic Ships of the Heavenly Host'. The Heavenly Host has finally come out of the closet and making their presence known by teaching you exactly how to see them.

The reason no one has been aware of them until now is that the ships are not corporal. They exist solely in the Fourth Dimension, and can only be seen by unique Radionic Cloud reflections they make in the clouds overhead when in the upper Fourth Dimension, and condensated moisture versions of themselves made when in the lower Fourth Dimension. Without knowing what to look for you would never suspect that anything was happening with the clouds you see. The Ships have been hiding in plain sight since the earliest days of the Bible.

Hundreds of thousands of the Radionnic Ships are now in Earth's atmosphere at any given time. Who are finally Disclosing themselves to Humanity by showing you exactly what kind of cloud signatures and condensations to look for and what each means. It is a soft Disclosure, meaning not by a spectacular sighting but through a book which spreads out quietly from hand to hand and society isn't disrupted.  The book is titled, 'The 'Radionnic Ships of the Heavenly Host'. The book is how the Disclosure will be disseminated eventually to Humanity as a whole, and the Crowdfunding Campaign is the start of how it will happen. You can help in this history making event by donating as much as you can.

The 'The Radionnic Ships of the Heavenly Host' is over four hundred and thirty pages long, is in full color, and includes over six hundred and fifty full size photographic examples of Radionnic Clouds and condensates with full explanations of each. By the time you have finished reading the book you will know for a certainty that Radionnic Ships are for real, that life exists on other planets, that there are higher and higher dimensions, and will know exactly what you are looking at and why whenever a Ship is present. The Crowdfunding Campaign seeks to raise $24,000, The Campaign has been mounted on the Gofundme.com Crowdfunding platform at http://gofundme.com/radionnic-ships/  The purpose of the Campaign is the raise sufficient happy lettuce to bulk print and market the book in large enough that it can sell for a comfortable $29.00 each. The book currently is being being printed one at at a time, in full color, on a laser printer at Amazon.com. Which forces the price to be an unwieldy $84.000 each on Amazon.

As the book reveals there are many types of Radionnic Ships, coming in all shapes and sizes. The book does a superb job of sorting them all out for the reader. The book also acts as an Atlas reference source lasting many lifetimes as the information will never get old. If you see a cloud, the Atlas will tell you what kind of Ship you are looking at and likely what it is doing. To give a quick little idea of how Radionnics works,  the following brief preface below presents a couple of relevant examples of what to expect, plus a couple of whimsical ones for good measure. As mentioned, the Ships form Radionnic Clouds when in the higher Fourth Dimension, and when in the lower frequencies of the Fourth Dimension, instead precipitate condensated versions of themselves from the water molecules around them. The lower the frequency the denser the condensations. The three objects in the photograph below photographed from the Space Station, popped up in an article in the “The Sun’ newspaper UK, in September 8, 2017. The article proposed that the three objects might be UFOs.

The next figure below is a blow up showing the three objects better. You can now see their saucer like nature and that they are not solid.

The three objects are in fact condensated Radionic Scout Ships of the Heavenly Host. Radionic Ships and are not corporal. The three objects are actually sitting sitting in the lower Fourth Dimension, having electrolyzed the water molecules around them and attracting them together into a moisturized replica of themselves, giving them the specific visibility you now see in the Third Dimension. Once condensated, a ship can move freely around with the water attraction holding together, even out past the atmosphere. Radionnic Ships are always polarized as either a positive pole or negative, and always appear in pairs so Universal magnetic parity is always upheld, even is one of the pair is not presently visible, and even if one is appearing on opposite sides of the planet. The dark condensated Ship visible above is a Negative Polarity Mobile Radionnic Scout Ship, the two white ones are Positive Polarity Mobile Radionnic Scout Ships.

A wise expression says that sic, 'One of a thing is the thing, two of the thing proves the thing'. The Ships above are proven. The Figure below was photographed in Brantford, Ontario on September 19, 2014. A close look shows that it has an identical pair of the Ships sitting in the arms of the vertical cloud at the right. The vertical cloud itself is a Negative Polarity Radionnic Anchor Scout Ship Cloud.

A blowup shown below shows that the left side of the photograph is filled with smaller similar versions of the condensated crafts, plus numerous more dense spherical condensed ships. 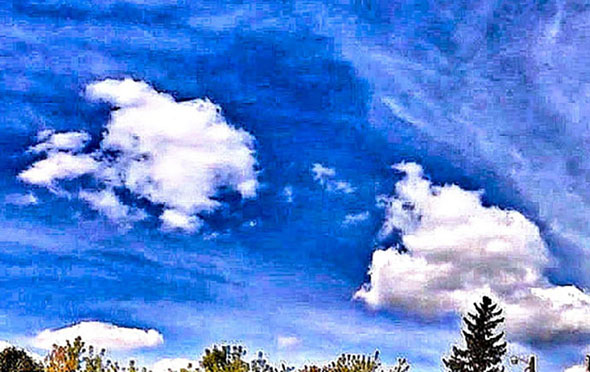 To give you an even better idea of the wide scope of the daily ships present around the World at any given time, below is another photograph from Brantford, Ontario showing dozens upon dozens of assorted condensates large and small.

People who spend their lives looking for solid metal ships whizzing erratically around are missing over ninety nine percent of the whole picture. And this is where a more fun part begins. On August 7, 2018, the Australian Newspaper ‘News.com.au’ published an article about the world recognized Clayton South UFO Park Memorial. The UFO Park commemorated the famous Melbourne Westfall High School sighting, where three hundred students and staff witnessed a whole fleet of purported UFOs flying by then landing in a field. A lengthy article about it was originally printed in the Australian 'Herald Sun' on March 12, 2017. The fact is that the Memorial and associated lore discussed in the article were just the tip of the iceberg. The rest of the iceberg is that a whole new chapter about the incident exists which nobody as yet has even suspected.

The fact is that the Melbourne sighting involved a supposed particular type of corporal UFO, which at the time was the limit of Man's understanding about off world crafts. The fact also is, as has also been mentioned above is that there are hundreds of thousands of Radionnic Ships now present around Earth  hiding in plain sight. The Radionnic Ships of the Heavenly Host are the good guys, the name itself should be the tip off. The point also as mentioned is that the Radionnic Ships are around all over the World but nobody notices. What better way to prove, that than to look at places where they are sitting like for years and nobody has ever noticed..

As mentioned, the Radionnic Ships are not corporal and exist in the Fourth Dimension. As the book reveals, the Ships are magnetic, hence the term ‘Radionnic’and can be detected by the unique visible magnetic cloud signatures and/or condensates they make in Earth’s Third Dimensional cloud cover whenever present. How the Melbourne sighting ties in, is that in a case of extreme whimsical irony, some of the photographs taken of the UFO Park Memorial over the years show Radionnic Clouds sitting right overhead. Two such photographs are presented below. The first shows a saucer shaped Radionnic Cloud, the second shows a Negative Polarity Radionnic Cloud. The unmistakable tell-tale of a Radionnic Cloud signature is that the Radial lines splay outward like the fingers of an open hand. The Radials at the left go out to the left, the ones up the middle go up the middle, and the ones at the right go out to the right. Nature can't make cloud patterns like that, and nobody but nobody ever makes Chemtrails in a radial pattern.

An even more ironic example of whimsy exists in Canada. In nineteen sixty six, the small town of St, Paul in the North East corner of the Province of Alberta, Canada build what is now a World famous UFO landing pad in the middle of its downtown core. The purported purpose was to sic, attract in a UFO. Actually, it was intended to attract in tourists by the thousands which it does.

To conclude, the following is a Positive Pole Radionnic Cloud to match the Negative pole Cloud shown above. The book also deals in detail with Radionnic Mother Ships and Radionnic Father Ships which can be up to ten miles in length.

The need for the public to know about the Disclosure book is obvious and has two aspects. The first is that the public finally knows the truth about the Ships existence by teaching them exactly how to see them. Also, by trickle down effect, the truth about the higher dimensions and also the truth about people living on other worlds becomes known. The book does exactly that as the Heavenly Host is from the Fifth Dimension all over Creation. The second aspect is as mentioned, that at the moment the book is being published by demand on Amazon,com at an un-wieldy $84.00 per copy. In order to bulk print the book in sufficient numbers to bring the price down to a more comfortable $29.00, the Crowdfunding Campaign at: http://gofundme.com/radionnic-ships/ needs to raise at least $24,000 to cover the cost of printing and marketing. Subsequent printings will be financed by sales from the first in ever expanding loops. This second aspect is just as important as the Disclosure itself, as the book in everyone's hands is how the Disclosure is to be circulated World Wide.

This is an unprecedented event in the annals of Mankind and needs all the help it can get. Donate twenty five dollars or twenty five hundred dollars, it’s all good. The Radionnic book is a serious publication in a way that no other printing in the past other than the Bible has even come close to.

Even if you are unable to donate you will surely find the information more than interesting and certainly most informative. If you are unable to make a donation, please kindly share details about the campaign on social media, with friends and acquaintances, your website, or any other way that you can.

A website version of the Disclosure is up at http://www.radionicships.com for those who want to see an early preview.

The Disclosure book is titled: 'The Radionnic Ships of the Heavenly Host.

If questions, do not hesitate to ask.

You are free to publish the details of the campaign as is, or edit it as you wish. A larger version of this email with more copy is available if you prefer.

If you operate a web site and feel a link from your site would be appropriate, a link would be greatly appreciated. If you blog, please pass the word.